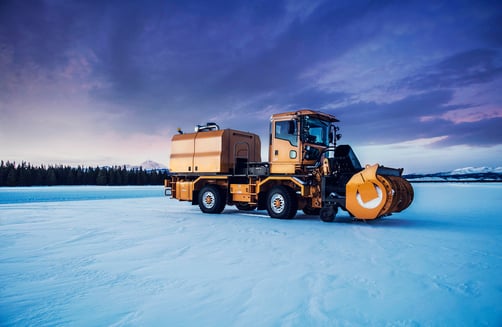 “We unveiled the H-Series Single Engine blower earlier this spring at the Snow Symposium, and are honored to have already sold and delivered the first two units to one of the largest and most respected airport systems in the nation,” said Jeff Resch, Oshkosh Airport Products Group vice president and general manager. “The Single Engine Blower is a versatile machine, and we are seeing a growing amount of interest in the vehicle by airports large and small.”

As equipment superintendent at MAC, Chuck Kanuit oversees maintenance for 400 vehicles. “We’ve wanted Oshkosh to build a single engine blower for our reliever airports, and we got involved in the design from a very early stage,” Kanuit explained. “We’re already familiar with much of the Single Engine Blower’s componentry and electronics from our other H-Series vehicles; this will be a big help when it comes to parts and maintenance.” He added, “Our operators are pretty excited, although we’re not really thinking about winter quite yet!”

The Oshkosh Single Engine Blower utilizes proven H-Series components and innovative technologies in a smaller, more maneuverable footprint. It features a weight-balanced design for increased control and maneuverability. The vehicle introduces the innovative Oshkosh Work Control™ system, a one-dial control for management of power to the blower head and drive wheels, enabling the operator to focus on blowing snow rather than managing engine rpm. Other vehicle highlights include a 3,000 tons per hour snow blowing capacity, a 120-inch wheelbase, and a compact 48-foot turning circle when outfitted with the Oshkosh All-Steer® all-wheel steering system.

Oshkosh conducted extensive R & D and customer research during the development process, and ease of operation was an important consideration. “With the Oshkosh Work Control system, the blower inputs are on one dial, and the operator can dial down for tonnage or dial up for cast distance,” said Les Crook, snow product manager for Oshkosh Airport Products. “They are able to find the sweet spot depending on their operation and the type and amount of snow. If you’re trying to drive too fast, the system will – behind the scenes – seamlessly slow the vehicle down to ensure the power required by the impeller is always available.”

Photo caption: Oshkosh Airport Products has sold and delivered two Oshkosh® H-Series™ Single Engine Blower vehicles to the Metropolitan Airports Commission (MAC). The vehicles will be placed into service in time for the upcoming snow season at Lake Elmo and Crystal Airports, two of the MAC’s general aviation airports located near the Twin Cities.

Oshkosh Airport Products, LLC, a division of Oshkosh Corporation, is a designer and builder of industry-leading airport firefighting and snow removal vehicles. Its flagship Striker® Aircraft Rescue and Fire Fighting (ARFF) vehicle and Oshkosh® H-Series™ snow removal chassis are known for their durability and superior performance and sold throughout the world. For more information, visit www.oshkoshairport.com.