The Oshkosh Snozzle® High Reach Extendable Turret (HRET) has been a powerful firefighting tool for airport fire departments worldwide. It is a product which arms airport firefighting crews against the greatest, most extreme ARFF threats. Fires can be attacked from every angle, including from elevated positions, on the ground, and far below grade. It can penetrate fire on both sides of the aircraft with intense precision to cool tight spaces through doorways and over wing exits without ever stepping foot inside the plane.

The first high reach extendable turret was introduced in 1987, and although these early models were limited to just a few positions, such as bedded to elevated with shorter heights of approximately 40 feet (12 meters), they were an incredible advancement in airport firefighting technology.

As designs for ARFF turrets changed with improving technology, the Snozzle HRET was developed and eventually incorporated new features which were requested by fire department partners and customers. In 2011, Oshkosh Corporation purchased the Snozzle HRET and began a series of innovations and improvements to further develop the product line. Production and assembly were brought to Oshkosh Airport Products, and the product became a valuable option on the ARFF vehicles we build today.

Some of the improved and innovative features included a higher boom elevation of 50 feet (15.2 meters), low attack positions, rotation, camera systems, and a piercing nozzle. The 65-foot (19.8 meters) boom was designed to further increase the stand-off distance between the ARFF vehicle and a fire. Both boom lengths can reach the second level of large aircraft such as the Boeing 747 and the Airbus A380. The 65-foot (19.8 meters) boom further enhanced safety by increasing the stand-off distance, allowing an ARFF to stay further away from exit slides and passengers exiting an aircraft.

The piercing nozzle gives airport firefighters the ability to penetrate a fuselage and apply fire suppressing agents inside an aircraft. This is the fastest and safest way to improve interior conditions to create a safer environment for evacuation and rescue operations. Piercing can be accomplished while passengers are exiting without interfering with their movement. Also, the toxic gas and smoke created by a fire can be forced out of the aircraft by the positive pressure created by the large volume of fine mist from the piercing tip. 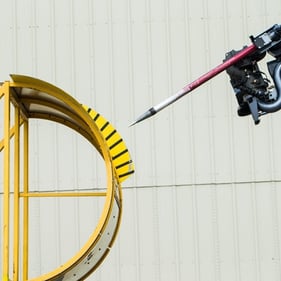 The Oshkosh Snozzle HRET gives ARFF operators the ability to control the speed of the pierce, which is a unique feature compared to similar products in the industry. Slow, precise piercing action helps prevent movement of unstable components. Additionally, penetration depth is important as the piercing nozzle tip must reach a clear area inside the plane to get the maximum effect of the spray pattern. Full-depth penetration is required on large body aircraft in order to maintain a level position of the piercing nozzle to ensure agent gets above seat backs and below luggage compartments.

The Snozzle HRET can penetrate to a depth of 36 inches (915 mm) and up to a total depth of 48 inches (1219 mm) with an optional extension, which can reach into cargo containers inside an aircraft. The tip can rotate 280 degrees with proportional rotation controls. It has a flow rate of 250 GPM (946 LPM) with the ability to disperse agent across two aisles of a wide-body aircraft. 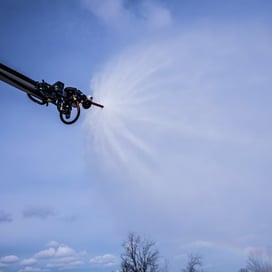 Feedback and insight from our customers and partners indicated the original head of the Snozzle HRET would benefit from refinements which would allow for easier use in tight spaces within an aircraft. The new design created a smaller head which allows the operator to apply water and firefighting agents inside of the aircraft through a doorway or over wing exits.

The current Snozzle HRET head is a narrow 24 inches (610 mm) with various lighting options, including HID and LED, as well as camera packages such as color, B/W, and Forward Looking Infrared (FLIR).

Working with customers, partners, and industry experts, the Oshkosh Airport Products team has added several Snozzle HRET innovations to enhance the product’s performance and usability over the years. These enhancements have made it an effective tool in a variety of operational scenarios.

The patented design of the Snozzle High Reach Extendable Turret shoots a full master stream right at ground level, helping to eliminate overspray, which greatly improves visibility and allows operators to get more agent on the targeted area. The low position puts the water stream near the ground to cut air supply from fire and allows the ARFF to attack wheel or brake fires with the wider spray pattern reaching under the aircraft, cooling fuel tanks, and cargo areas.

The compact design allows the Snozzle HRET to be positioned inside aircraft doors to illuminate the aircraft interior during rescue operations and allows the high-volume nozzle to deploy firefighting agent to suppress interior fires.

Firefighters can position the Snozzle HRET head well below grade to support fire suppression efforts below the ARFF vehicle.

A variety of firefighting agents are available to airport firefighters to be able to attack and suppress fires of all types. The Snozzle HRET can inject dry chemical powder into the water stream and is able to apply Halotron through the piercing tip. Controls for the tip and boom have become more user-friendly and precise. The Snozzle HRET features proportional joystick controls to help the operator pierce an object at the optimal angle with the same feel and functionality as the turret joysticks. This allows for seamless integration into customized ARFF vehicles and minimizes confusion between Snozzle HRET controls and turret controls.

The Oshkosh K-Factor system gives the operator critical data on the alignment of the piercing tip when responding to low visibility situations caused by nightfall, heavy rain, fog, or smoke. The system uses ultrasonic sensors and inclinometers to provide a better understanding of where the piercing tip is positioned and provides information on optimal piercing tip and boom angles. 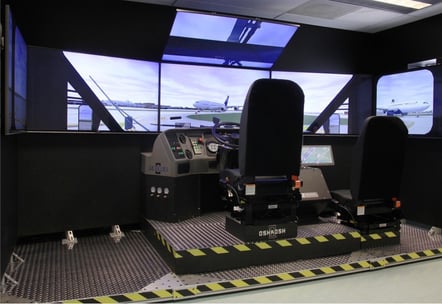 Oshkosh has developed several types of simulators for firefighters to receive training on using the Snozzle High Reach Extendable Turret and piercing nozzle. The Type 1 simulator is laptop-based and utilizes a Snozzle HRET console and joystick along with a steering wheel and pedal.

The Type 2 simulator is a PC computer system built into a cabinet with dual 80-inch displays covering the view at the front and top of an ARFF windshield and is integrated with a sound simulation system. The center console is similar to a Striker ARFF and includes a Snozzle HRET turret joystick and bumper turret joystick. A steering wheel and pedals are included for driving operations training. The system also includes on-screen mirrors with dynamic views, virtual windshield wipers, and two office style seats for the driver and turret operator.

The Type 2 simulator can be expanded to include additional control stations, larger displays, and items to add additional realism, such as headset radios.

Does your fire department currently use an Oshkosh Snozzle HRET? Give us your feedback in the comments below, or contact our team today to learn more.