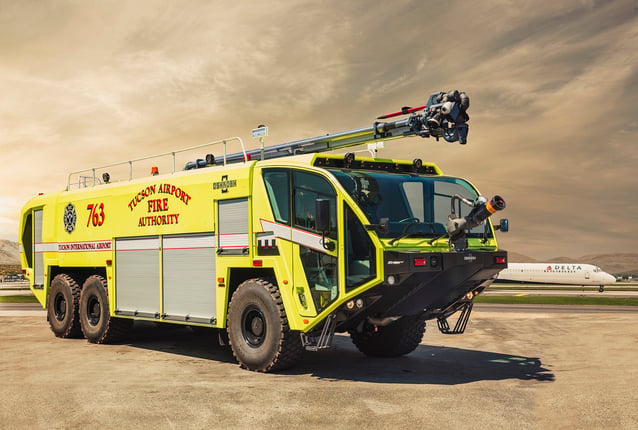 “The Oshkosh-exclusive Snozzle sets the industry standard, and we’re really proud to place our 100th Snozzle-equipped apparatus on duty with Tucson International Airport,” said Jeff Resch, Oshkosh Airport Products Group vice president and general manager. “The Snozzle continues to gain new customers beyond aircraft rescue and firefighting – including municipal fire departments, mining operations, oilfield and petrochemical plants, and other applications – where its many benefits enhance performance while keeping firefighters further away from danger.”

The Oshkosh Snozzle is available on the Striker’s full range of 4 X 4, 6 X 6 and 8 X 8 models, as well as on Pierce custom chassis.  The Snozzle features a hardened carbide steel tip, a perforated nozzle, and a forward-looking infrared camera. The device enables firefighters to discharge from 6.1 meters (20 feet) below grade to elevations as high as 19.8 meters (65 feet).

Oshkosh continues to invest in the Snozzle HRET to keep it at the leading edge of firefighting technology. Recent advancements include integrating the electronic control system for easier troubleshooting, faster servicing, and enhanced reliability. The piercing steel tip now offers an updated hydraulic rotary actuator, an increased range of motion (up to 280º), longer piercing depth, and a decreased overall width for better visibility. Inside the cab, a new control module feature simplifies operator controls and provides smoother operation.

About The Tucson Airport Authority

The Tucson Airport Authority (TAA) is an independent, non-profit organization operating Tucson International Airport (TUS) and general aviation reliever Ryan Airfield (RYN). TAA has sustained its operations since its origin in 1948 from airport generated revenues without the use of local taxes, and continues to invest millions of dollars each year in safety, security and facility infrastructure that drives job creation and economic activity for the benefit of Tucson and southern Arizona. The two airports currently support 35,000 jobs and house more than 100 tenants, and serve a diverse mix of both aviation and non-aviation related businesses, as well as military and government operations.

Oshkosh Airport Products, LLC, a division of Oshkosh Corporation (NYSE: OSK), is a designer and builder of industry-leading airport firefighting and snow removal vehicles. Its flagship Striker® Aircraft Rescue and Fire Fighting (ARFF) vehicle and Oshkosh® H-Series™ snow removal chassis are known for their durability and superior performance and sold throughout the world. For more information, visit www.oshkoshairport.com.