“We are honored to be chosen, once again, by Incheon International Airport to provide Oshkosh Striker vehicles for this remarkable complex,” said Jeff Resch, Oshkosh Airport Products Group vice president and general manager. “Sales of the Oshkosh Striker continue to accelerate in countries throughout the Asia Pacific region, and that’s a testament to Oshkosh performance, reliability and support after the sale.”

The matching pair of Oshkosh Striker 8 x 8 vehicles for IIA each feature a 950 horsepower engine with electronic fuel management, Oshkosh TAK-4® all-wheel independent suspension for superior ride quality, a rear steering system (to articulate the rear wheels for enhanced maneuverability), and a 30-degree angle of approach and departure. The wheelbase is 6,782 mm (267-inches) and the overall length is 13,589 mm (535 inches). 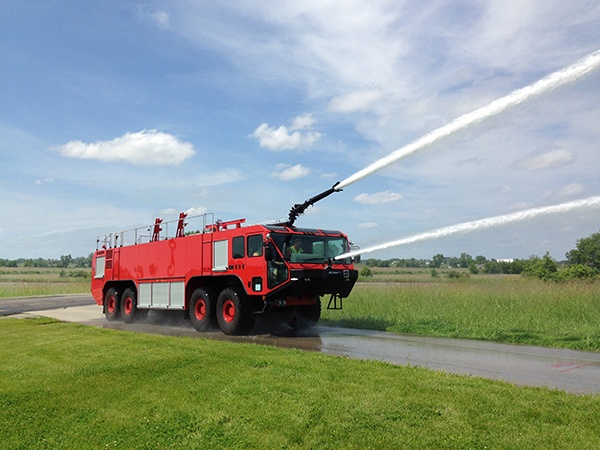 The firefighting system includes a 10,000 lpm (2642 gpm) single stage pump, a 17,033-liter (4,500-gallon) water tank capacity, a 2,385-liter (630-gallon) Aqueous Film Forming Foam (AFFF) concentrate tank, and a 250-kilogram (550-pound) dry chemical system delivered through a dry chemical hose reel mounted in an upper right side compartment. The vehicle offers a structural firefighting control panel and two 64 mm (2.5-inch) discharge lines, one on each side of the truck. The vehicle’s primary turret is a roof-mounted, electric joystick controlled unit that can rotate 135 degrees on either side of center and elevate 45 degrees above horizontal. A secondary turret is mounted on the front bumper, and five undertruck nozzles protect the underside of the vehicle.

About IAA
Incheon International Airport (IIA), opened in 2001, is one of the world’s largest airports. It is also one of the most active.  In 2013, IIA was the world’s fourth busiest airport for cargo traffic and the ninth busiest for international passengers. Located 70 km from Seoul, the capital and largest city in South Korea, IIA serves as a hub for international civilian air transportation and cargo traffic in East Asia. It is a main hub for Korea Air, Asiana Airlines, Juju Air, and Polar Air Cargo. The airport features three parallel runways, two of which are 3,750 meters long (12,300 feet) and one that is 4,000 meters long (13,000 feet).

About Oshkosh Airport Products
The Oshkosh Airport Group, LLC, an Oshkosh Corporation (NYSE: OSK) company, is a designer and builder of industry-leading airport firefighting and snow removal vehicles. Its flagship Striker® Aircraft Rescue and Fire Fighting (ARFF) vehicle and Oshkosh® H-Series™ snow removal chassis are known for their durability and superior performance and sold throughout the world. For more information, visit www.oshkoshairport.com.

Forward-Looking Statements
This press release contains statements that the Company believes to be “forward-looking statements” within the meaning of the Private Securities Litigation Reform Act of 1995. All statements other than statements of historical fact, including, without limitation, statements regarding the Company’s future financial position, business strategy, targets, projected sales, costs, earnings, capital expenditures, debt levels and cash flows, and plans and objectives of management for future operations, are forward-looking statements. When used in this press release, words such as “may,” “will,” “expect,” “intend,” “estimate,” “anticipate,” “believe,” “should,” “project” or “plan” or the negative thereof or variations thereon or similar terminology are generally intended to identify forward-looking statements. These forward-looking statements are not guarantees of future performance and are subject to risks, uncertainties, assumptions and other factors, some of which are beyond the Company’s control, which could cause actual results to differ materially from those expressed or implied by such forward-looking statements. These factors include the cyclical nature of the Company’s access equipment, commercial and fire & emergency markets, which are particularly impacted by the strength of U.S. and European economies; the strength of the U.S. dollar and its impact on Company exports, translation of foreign sales and purchased materials; the expected level and timing of DoD and international defense customer procurement of products and services and funding thereof; risks related to reductions in government expenditures in light of U.S. defense budget pressures, sequestration and an uncertain DoD tactical wheeled vehicle strategy, including the Company’s ability to successfully manage the cost reductions required as a result of lower customer orders in the defense segment; the Company’s ability to win a U.S. Joint Light Tactical Vehicle production contract award and international defense contract awards; the Company’s ability to increase prices to raise margins or offset higher input costs; increasing commodity and other raw material costs, particularly in a sustained economic recovery; risks related to facilities expansion, consolidation and alignment, including the amounts of related costs and charges and that anticipated cost savings may not be achieved; global economic uncertainty, which could lead to additional impairment charges related to many of the Company’s intangible assets and/or a slower recovery in the Company’s cyclical businesses than Company or equity market expectations; projected adoption rates of work at height machinery in emerging markets; risks related to the collectability of receivables, particularly for those businesses with exposure to construction markets; the cost of any warranty campaigns related to the Company’s products; risks related to production or shipment delays arising from quality or production issues; risks associated with international operations and sales, including compliance with the Foreign Corrupt Practices Act; the Company’s ability to comply with complex laws and regulations applicable to U.S. government contractors; the impact of severe weather or natural disasters that may affect the Company, its suppliers or its customers; cyber security risks and costs of defending against, mitigating and responding to a data security breach; and risks related to the Company’s ability to successfully execute on its strategic road map and meet its long-term financial goals. Additional information concerning these and other factors is contained in the Company’s filings with the Securities and Exchange Commission. All forward-looking statements speak only as of the date of this press release. The Company assumes no obligation, and disclaims any obligation, to update information contained in this press release. Investors should be aware that the Company may not update such information until the Company’s next quarterly earnings conference call, if at all.