Major order will be delivered beginning in September 2015.


OSHKOSH, WIS. (September 3, 2015) – Oshkosh Airport Products Group LLC, an Oshkosh Corporation (NYSE: OSK) company, received an order for 22 Oshkosh® H-Series™ high-speed snow blower vehicles from O’Hare International Airport (ORD) and the Chicago Department of Aviation in Chicago, Illinois. The 22 vehicles are identically configured and will be delivered, beginning in September, ahead of the 2015 / 2016 winter season.

“O’Hare has more than 200 Oshkosh Airport Products vehicles on duty and we’re very proud to have them select us for this significant order,” said Jeff Resch, Oshkosh Airport Products Group vice president and general manager. “These new trucks will replace 1983 Oshkosh blowers that have done an amazing job – for more than 30 years – at the world’s busiest airport. We’re thrilled to be its snow removal brand of choice.”

Known for its longevity and reliability, the Oshkosh high-speed blower can throw up to 5,000 tons of snow per hour, with a cast distance of up to 200 feet. The blower head is powered by a dedicated 575 HP engine, and the system features a two-stage blower heard and variable speed hydrostatic ribbon.

“This order began as an 18 vehicle purchase but has since grown to 22 units; it’s one of our largest orders ever and we’re honored to serve this world renowned airport,” said Mike Mikoola, president of Temco Machinery, Inc., the Oshkosh snow removal dealer in Illinois, Indiana, and Kentucky. “The performance, durability and reliability of Oshkosh snow removal vehicles are what set them in a class by themselves. The duty cycle at O’Hare is such that these vehicles will be used just about every single day in the snow season.”

The renowned Oshkosh H-Series cab and chassis are purpose-built for snow removal and nothing else. The vehicle features a heavy-duty single piece frame, all-wheel drive, patented Oshkosh transfer cases and axles, and Oshkosh ALL-STEER® all-wheel steering system. The cab offers unmatched outward visibility, with a panoramic windshield, large windows and a design that eliminates corner posts for a better view of the runway. Its 55,000 BTU heater and defroster feature a digital climate control system. The cab also features two full-size seats, power windows, and cup holders for added comfort. 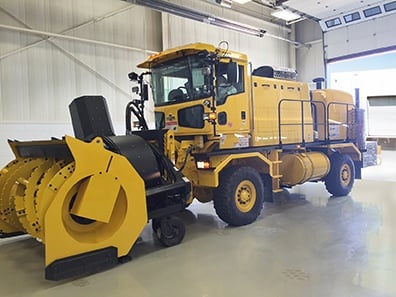 Photo caption: Oshkosh Airport Products Group received an order for 22 Oshkosh® H-Series™ high-speed snow blower vehicles from O’Hare International Airport and the Chicago Department of Aviation in Chicago, Illinois. The 22 vehicles are identically configured and will be delivered beginning this September, ahead of the 2015 winter season.

About ORD
Operated by the City of Chicago Department of Aviation, ORD is considered the busiest airport in the world when measured by the number of takeoffs and landings and the sixth busiest in terms of passenger traffic. O'Hare has direct service to a total of 210 destinations, including 153 domestic destinations in the United States and 57 international destinations in North America, South America, Asia and Europe.

About Oshkosh Airport Products
Oshkosh Airport Products, LLC, an Oshkosh Corporation company, is a designer and builder of industry-leading airport firefighting and snow removal vehicles. Its flagship Striker® Aircraft Rescue and Fire Fighting (ARFF) vehicle and Oshkosh® H-Series™ snow removal chassis are known for their durability and superior performance and sold throughout the world. For more information, visit www.oshkoshairport.com.

Forward-Looking Statements
This press release contains statements that the Company believes to be “forward-looking statements” within the meaning of the Private Securities Litigation Reform Act of 1995. All statements other than statements of historical fact, including, without limitation, statements regarding the Company’s future financial position, business strategy, targets, projected sales, costs, earnings, capital expenditures, debt levels and cash flows, and plans and objectives of management for future operations, are forward-looking statements. When used in this press release, words such as “may,” “will,” “expect,” “intend,” “estimate,” “anticipate,” “believe,” “should,” “project” or “plan” or the negative thereof or variations thereon or similar terminology are generally intended to identify forward-looking statements. These forward-looking statements are not guarantees of future performance and are subject to risks, uncertainties, assumptions and other factors, some of which are beyond the Company’s control, which could cause actual results to differ materially from those expressed or implied by such forward-looking statements. These factors include the cyclical nature of the Company’s access equipment, commercial and fire & emergency markets, which are particularly impacted by the strength of U.S. and European economies; the Company’s estimates of access equipment demand; the strength of the U.S. dollar and its impact on Company exports, translation of foreign sales and purchased materials; the expected level and timing of DoD and international defense customer procurement of products and services and funding thereof; risks related to reductions in government expenditures in light of U.S. defense budget pressures, sequestration, an uncertain DoD tactical wheeled vehicle strategy and uncertainties associated with government contracts; risks related to the JLTV production contract award that the Company recently received, including those associated with commencement of production under the contract;  the Company’s ability to finalize international contracts for a significant quantity of M-ATVs, with sales beginning in fiscal 2016; the Company’s ability to increase prices to raise margins or offset higher input costs; increasing commodity and other raw material costs, particularly in a sustained economic recovery; risks related to facilities expansion, consolidation and alignment, including the amounts of related costs and charges and that anticipated cost savings may not be achieved; global economic uncertainty, which could lead to additional impairment charges related to many of the Company’s intangible assets and/or a slower recovery in the Company’s cyclical businesses than Company or equity market expectations; projected adoption rates of work at height machinery in emerging markets; the impact of severe weather or natural disasters that may affect the Company, its suppliers or its customers; risks related to the collectability of receivables, particularly for those businesses with exposure to construction markets; the cost of any warranty campaigns related to the Company’s products; risks related to production or shipment delays arising from quality or production issues; risks associated with international operations and sales, including compliance with the Foreign Corrupt Practices Act; the Company’s ability to comply with complex laws and regulations applicable to U.S. government contractors; cybersecurity risks and costs of defending against, mitigating and responding to a data security breach; and risks related to the Company’s ability to successfully execute on its strategic road map and meet its long-term financial goals. Additional information concerning these and other factors is contained in the Company’s filings with the Securities and Exchange Commission. All forward-looking statements speak only as of the date of this press release. The Company assumes no obligation, and disclaims any obligation, to update information contained in this press release. Investors should be aware that the Company may not update such information until the Company’s next quarterly earnings conference call, if at all.