Growth in personnel and facilities to benefit airport, industrial, and
municipal firefighting organizations.


OSHKOSH, WIS. (May 19, 2015) – Oshkosh Fire & Emergency Group, part of Oshkosh Corporation (NYSE: OSK), is expanding its presence in the Middle East to better serve Oshkosh Airport Products and Pierce Manufacturing customers throughout the region. The expansion initiatives, among others, include the appointments of regional management and sales management personnel, and the addition of new field service representatives. Moreover, Oshkosh is augmenting its aftermarket department and investing in a new regional spare parts distribution center.

“Oshkosh is committed to providing customers in the Middle East with the best possible service and support after the sale, and these organizational and infrastructure changes are a direct reflection of this strategic mission in action,” said Jim Johnson, Oshkosh Corporation executive vice president and president, Fire & Emergency.

“We have an excellent team in place and, together with the expansion of our parts distribution capabilities, we are sized right to support the Oshkosh and Pierce market share growth we continue to experience throughout the region,” added Salim Hawi, Oshkosh Corporation vice president, international sales.

Bassam Munem, Oshkosh senior regional manager for Middle East, now leads the Oshkosh Arabia Regional Office for Fire and Emergency in Jebel Ali, Dubai. Other personnel changes include the addition of a sales manager for Saudi Arabia and Bahrain, and field service representatives in the UAE and Saudi Arabia. In addition to these investments, Oshkosh is adding a new regional spare parts distribution center in Abu Dhabi. Oshkosh is also expanding its aftermarket department to enhance customer service. The Saudi office, Aftermarket department, and spare parts distribution center all report to the Oshkosh Arabia Regional Office in Dubai.

“At Interschutz 2015, we are about to unveil an all-new Oshkosh fire apparatus and introduce plans for a global Striker 8 X 8 featuring twin rear-mounted Scania low emission engines,” added Johnson. “Both of these new products are designed with regions like the Middle East in mind. We invite all Interschutz 2015 visitors to be sure to visit the Oshkosh stand.” 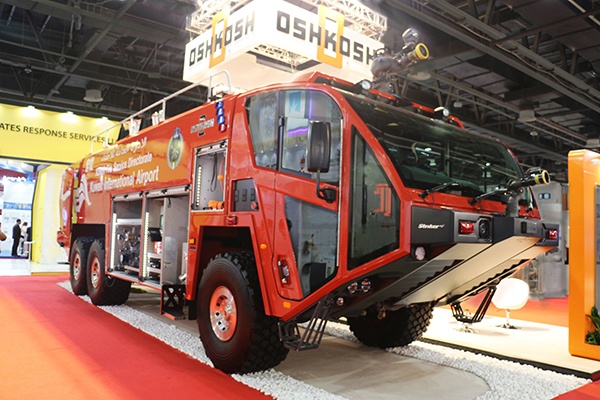 About Interschutz
INTERSCHUTZ 2015 is the international exhibition for fire prevention, disaster relief, rescue, safety and security. Around 1,300 exhibitors from more than 40 countries will be presenting their products and services at the event, which runs from 8 – 13 June. INTERSCHUTZ will occupy five halls and an open-air site at the Hannover Exhibition Grounds. Deutsche Messe organizes the event with the support of the German Association for Fire Prevention, the German Fire Brigade Association and the German Engineering Federation.

About Oshkosh Airport Group
The Oshkosh Airport Group, LLC, an Oshkosh Corporation (NYSE: OSK) company, is a designer and builder of industry-leading airport firefighting and snow removal vehicles. Its flagship Striker® Aircraft Rescue and Fire Fighting (ARFF) vehicle and Oshkosh® H-Series™ snow removal chassis are known for their durability and superior performance and sold throughout the world. For more information, visit www.oshkoshairport.com.

Forward-Looking Statements
This press release contains statements that the Company believes to be “forward-looking statements” within the meaning of the Private Securities Litigation Reform Act of 1995. All statements other than statements of historical fact, including, without limitation, statements regarding the Company’s future financial position, business strategy, targets, projected sales, costs, earnings, capital expenditures, debt levels and cash flows, and plans and objectives of management for future operations, are forward-looking statements. When used in this press release, words such as “may,” “will,” “expect,” “intend,” “estimate,” “anticipate,” “believe,” “should,” “project” or “plan” or the negative thereof or variations thereon or similar terminology are generally intended to identify forward-looking statements. These forward-looking statements are not guarantees of future performance and are subject to risks, uncertainties, assumptions and other factors, some of which are beyond the Company’s control, which could cause actual results to differ materially from those expressed or implied by such forward-looking statements. These factors include the cyclical nature of the Company’s access equipment, commercial and fire & emergency markets, which are particularly impacted by the strength of U.S. and European economies; the strength of emerging market growth and projected adoption rates of work at height machinery; the expected level and timing of DoD and international defense customer procurement of products and services and funding thereof; risks related to reductions in government expenditures in light of U.S. defense budget pressures, sequestration and an uncertain DoD tactical wheeled vehicle strategy, including the Company’s ability to successfully manage the cost reductions required as a result of lower customer orders in the defense segment; the Company’s ability to win a U.S. Joint Light Tactical Vehicle production contract award and international defense contract awards; the Company’s ability to increase prices to raise margins or offset higher input costs; increasing commodity and other raw material costs, particularly in a sustained economic recovery; risks related to facilities expansion, consolidation and alignment, including the amounts of related costs and charges and that anticipated cost savings may not be achieved; global economic uncertainty, which could lead to additional impairment charges related to many of the Company’s intangible assets and/or a slower recovery in the Company’s cyclical businesses than Company or equity market expectations; risks related to the collectability of receivables, particularly for those businesses with exposure to construction markets; the cost of any warranty campaigns related to the Company’s products; risks related to production or shipment delays arising from quality or production issues; risks associated with international operations and sales, including foreign currency fluctuations and compliance with the Foreign Corrupt Practices Act; the Company’s ability to comply with complex laws and regulations applicable to U.S. government contractors; the impact of severe weather or natural disasters that may affect the Company, its suppliers or its customers; cyber security risks and costs of defending against, mitigating and responding to a data security breach; and risks related to the Company’s ability to successfully execute on its strategic road map and meet its long-term financial goals. Additional information concerning these and other factors is contained in the Company’s filings with the Securities and Exchange Commission. All forward-looking statements speak only as of the date of this press release. The Company assumes no obligation, and disclaims any obligation, to update information contained in this press release. Investors should be aware that the Company may not update such information until the Company’s next quarterly earnings conference call, if at all.